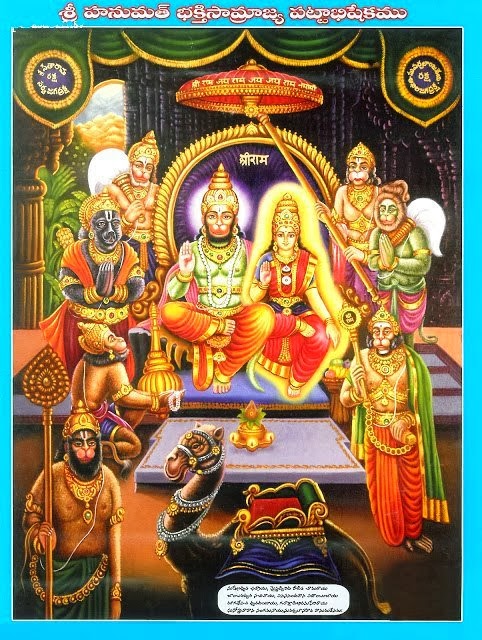 Never knew that Lord Hanuman was married. Rare picture – at least for me! Jai Hanuman!

The boons granted by the gods made Hanuman invincible.

His pranks irritated many.

He did not spare the sages even.

He would pounce on them and tear their dress.

He would throw fruit and leaves, perched atop trees.

They bore with him patiently being aware of his future.

One day a sage was very much disturbed by Hanumantha.

The sage went into a rage and cursed Hanumantha:

“ May you forget your strength with which you have caused us so much of pain”.

The curse changed the life of Hanuman altogether.

He became very calm and inert.

The change pained the sages.

They altered the curse on him.

They blessed him thus:

“If any one reminds you of your strength, you would recognize your
strength and abilities and succeed”.

He became a well-behaved child and an epitome of virtuousness.

His mother told him:

“Son! It is time to get educated. There is no better teacher than Surya, the Sun god, who dispels all darkness. Go to him and gain knowledge.”

Even though he was omnipotent, Hanuman obeyed his mother.

He reached the Surya Mandala and humbly prayed the Sun god:

“O! Surya Deva, I want to learn Vedas, Vedangas, and Upangas from you. Please teach me.” Surya replied:
“O! Boy of Anjana, I am always on the move, as ordained by Almighty, how can I teach you? ”

Hanuman was angered.
He blocked the path of Surya.
Surya pacified Hanuman.

He said: “I have no objection to teach you. But you have to find a way to learn”.

Surya was moving forward and was teaching Hanuman.

Lord Siva is said to know all and Hanuman, who is Lord Siva’s incarnation, proved to be one who knows all as well.

With in a week of his education, he astonished Surya.

Hanuman wanted to continue his education.

Instead of walking backward, he put one foot on the rising hill and the other one on the setting hill to face the Sun god.

Surya taught all that is to be taught to Hanuman.

Surya was married to Sanjana, a daughter of Viswakarma.

Sanjana was devoted wife but was unable to bear the heat emanating from the Sun’s rays.

She was suffering with anguish.

Her mother noticed the daughter’s plight and sought to know as to what the problem was.

Sanjana explained her problem to her mother.

Her mother in turn told Viswakarma of Sanjana’s problem.

Viswakarma told Surya that he would polish off some of the luminescence of Surya.

Surya agreed. Viswakarma was able to polish off some luminescence of his son-in-law.

The luminescence thus separated took the form of young woman.

Her beauty and grace astonished even gods.

Indra wanted to know as to who would marry that shinning brilliant young women.

Brahma thought for a while and replied: “Hanuman who is essence of Lord Siva’s fiery power will marry the young woman. Since Hanuman tried to grab the ever glowing Sun god, he alone can bear this glowing young woman”.

By than Hanuman’s education was complete.

He was ready to graduate.

He bowed to Lord Surya and said: “O! My divine teacher! Thanks to you I am educated now. I would like to take your leave now. I would like to offer you an appropriate fee as Guru Dakshina. Kindly order me”.
Surya immediately replied:
“O Hanuman, you are the incarnation of Lord Siva who bore the poisonous HAALAAHALA to save the universe when the ocean was churned. You are also son of Agni, the fire god. Viswakarma separated a part of my luminescence and the world is unable to bear it. You are the only one who can bear it. So I want to offer you my daughter Suvarchala formed from my ‘VARCHAS’ (luminescence), in marriage. Marry my daughter. Since husband is the one who is to bear, you also bear my ‘Suvarchas’ by marrying Suvarchala. Your marrying her shall be my Guru Dakshina”.

Hanuman listened to his teacher and replied politely:
“O Lord! I have decided to follow Brahmacharya throughout my life.
How can I marry?”

Surya replied:
“O Hanuman, this Suvarchala is a divine one, Ayonija. She would be a devoted wife. I am giving you the boon that you would still be a Brahmachari even after marriage. You would continue to be a Prajapatya Brahmachari. Your marriage is only for the welfare of the Universe and it would not affect your chosen course of celibacy. You were a born Brahmachari with a Yajnopavita (Sacred thread). Brahmacharya will be your eternal pursuit. Since you are going to be a Brahma in future, Suvarchala will then occupy the place of Vani”. 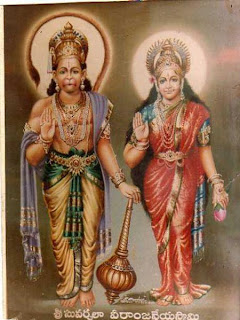 Posted by இராஜராஜேஸ்வரி at 5:41 AM 15 comments